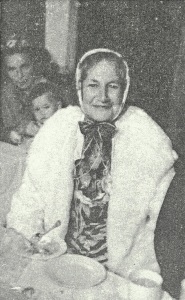 Nothing has been found on her childhood or education, again we expect this to be much the same as her siblings.

In 1905, aged 24 Emily marries George Everard Buckworth, both lived at Katikati, in the Bay of Plenty and wed at Arora at Mrs Stanaway’s residence. (Marriage Certificate number 1905/16863)

George was born 31 July 1883 in Whakatane, Bay of Plenty, New Zealand. He was one of four children to Everard Francis Buckworth and Mary Leech. In 1901 he served with the NZEF in the Boer War, he had returned and was working as a butcher when he met Emily.

Why Emily moved to Katikati we do not know, but this is about the same time as her parents had moved to Auckland, perhaps it was for employment. We do know her brother Albert was also in Katikati at the same time.

On 29 August 1907 Emily and George have a son, Charles Marshall, listed as born in Pitt Street, Auckland. Then, on 23 August 1910 they have a girl, Florence Annie Cecilia again born in Auckland.

On 20 July 1912 on the vessel Maheno, Emily and her family depart Auckland for Sydney, New South Wales. We do not know why they went to Sydney, if it was for a permanent move or if was with her husband’s family. But by 1914 we have her back living with her parents at 69 Symonds Street, her husband has been arrested in Australia and has been imprisoned on charges of being an accessory to murder, the location of the children is unknown.

By 1913, Emily and George had separated – It also seems as though the children were split, Charles stayed in Australia with his father and his family, while Florence moved back to New Zealand with her mother. It has been said to me that Emily was known in Australia and for the next two generations as “Black Annie” and with this attitude who could blame her in returning to New Zealand. Australians who met her would have just presumed that she was part Australian Aborigine.

“Manslaughter – North Sydney. Annie Dessiue (43), charged with causing the death of Sophia Winifred Warner, by attempting to procure abortion by mechanical means, and George Everard Buckworth (32), charged with being an accessory before the fact to the commission of the said felony, have been arrested by Senior-stables gates and Vindin, and Constable Coombes, Sydney Police. Committed for trial by the Acting City Coroner at Sydney Sessions. Admitted to Bail.”

The Sydney Morning Herald on 7 July 1914 had a story stating;

“A WOMAN’S DEATH.- ALLEGED MANSLAUGHTER – COMMITTED FOR TRIAL. An inquest regarding the death of Sophia Winifred Waner, 28 a single woman at the Mater Misericordiae Hospital on June 20, was held by Mr. Fincham in the Coroner s Court yesterday. Mr. Robinson of the Crown Law Department appeared for the Crown Mr. E R Abigail represented Annie Desuise and Mr. Leslie Gannon appeared for George Everard Buck- worth who were charged with being concerned in the death. The evidence of Dr Kelly of North Sydney was to the effect that George Everard Buck- worth called on him on June 19, and asked him to see deceased who he said was suffering from appendicitis. He saw her by herself and she stated that a woman at Drammoyne had used an instrument. He ordered deceased’s removal to the hospital where he operated on her but she died on June 20. The deceased’s dying depositions were taken by Mr. John S Dodson CPS at North Sydney. On that occasion Annie Desuise was pre- sent. Deceased recognized Desuise as the woman who used the instrument upon her. Deceased though suffering grout pain was perfectly conscious. She said she knew Desuise under the name of M’Ewan and that she had paid her £3 3s. Evidence was also given by Sarah Ethel Poole, a sister of the deceased by Dr. Palmer First Government Medical Officer and by Constable Coombes. Agnes Barry of Falcon street North Sydney being warned by the Coroner gave evidence but declined to answer several questions. Both Buckworth and Desuise reserved their defence. Desuise was committed for trial on a charge of manslaughter. Duckworth was com- mitted for trial on a charge of being an accessory before the fact. Bail was allowed. In the case of Desuise it was fixed at a personal surety of £250 and two sureties of £125 each. In the case of Buckworth a personal recognizance of £100 and two sureties of £50 were accepted.”

George enlists in the Australian Army into the Signal Squadron, cable section as a driver in late 1916, he survives the war and returns to Australia on 5 March 1919. Emily and George do not re-unite and sometime in 1921 divorce proceedings were started and then on 5 July 1922 they divorce (refer NSW State records and The Sydney Morning Herald 2 Nov 1922).

“BUCKWORTH v BUCKWORTH. George Everard Buckworth sought divorce from Emily Annie Buckworth (formerly Stanaway) on the ground of desertion. The parties were married in New Zealand in April, 1905, according to the rites of the Presbyterian Church. A decree nial was granted, returnable in six months. Mr. L. C. Elliott appeared for the petitioner.”

Emily marries for the third time in 1930 to Gordon Viner Wood (Marriage Certificate number 1930/774), in New Zealand. Gordon is a Constable with the New Zealand Police.

From the 1935 Electoral Roll we have Emily and Gordon living at 19a Caroline Street, Wellington.

In the 1949 Electoral Roll Emily and Gordon are now living at 181 Ohiro Road, Wellington, Gordon is still a Constable.