Vernon Rowlands was born in the Northern Wairoa, 31 December 1894 (twin with Clara) (Birth Certificate number 1895/10535). He was the sixth child, but second son, of Phoebe and Donald Rowlands.

Not much is known about his childhood other than we could expect it to be much the same as his siblings and of other children living in the area at that time. 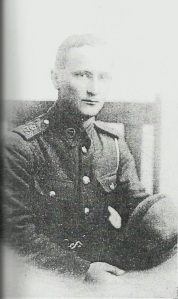 The first record we have of Vernon is in 1916, where he is listed in the New Zealand Army WWI Nominal Roll. His regiment number is given as 26691, his occupation is listed as “Clothing Cutter” and the next of kin is his mother Mrs P Rowlands, Kingsland Terrace, Auckland.

From an article printed in the New Zealand Herald on 30 June 1917 we know that at the time of enlistment he was in the King Country in the employment of Ellis and Burnand Ltd.

Vernon had enlisted in the NZEF and embarked for Europe on 11 October 1916 with the 18th Reinforcements Auckland Infantry Battalion, A Company. He left on the ship Tofua from Wellington bound for Plymouth, England.

We know he did not marry but had a girl, Nellie Cochran, waiting for him in Mt Eden, Auckland.

On 4 June 1917 in the Battle of Messines, in Belgium, Private Vernon Rowlands was killed in action, aged 22. He is buried in the La Plus Douve Farm Cemetery, Comines-Warneton, Hainaut, Belgium. 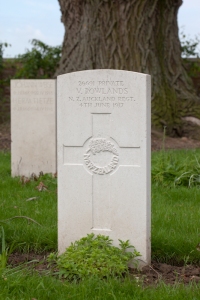 A number of death notices were published in the Auckland Star in 1919 and then again in 1921, by not only his parents, bothers and sisters but also a grieving Nellie Cochran. 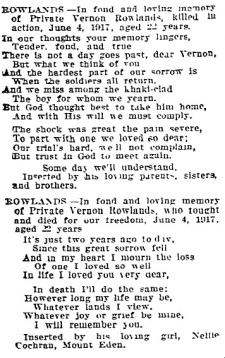 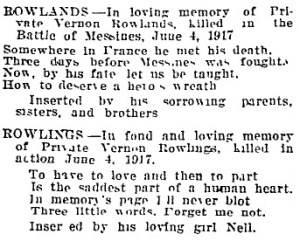