Not much is known of his childhood other than we could expect it to be much the same as other children at the time in Auckland follow his parents move there.

The Parker Family – Charles, Amy with their children Ernest, Iris and John.

The first record we have of Charles is from the Electoral roll from 1900, at the age of 23 he is listed as a clerk and living on College Road.

At some stage between 1900 and 1902 he moves to Western Australia – no details found.

Charles appears on 1 October 1902 in the paper announcing his marriage to May Frances Allen (1882-1969) (Marriage Certificate Unknown), in Fremantle, Western Australia. The Auckland Star on December 1, 1902 listed the marriage as;

In 1903 we have him living in Johnson Street in Buckland Hill, Fremantle and listed as an accountant.

PARKER – On Thursday, January 23, 1904, at “Westholme,” Johnston Street, Cottesloe, West Australia, the wife of Charles Clark Parker of a daughter. Both splendid.

On 30 September 1905 in The West Australian paper we have another birth notice stating the birth of a son on 28 September, 1905, it reads;

PARKER – On Thursday, September 28, 1905, at “Westholme,” Johnston Street, Cottesloe, the wife of Charles Clark Parker of a son.

Charles’ Certificate for the Ancient Order of Foresters 1920.

In February 1920 Charles becomes a member of the Ancient Order of Foresters.

From a later death notice of Amy’s mother we find that the two children are Iris May and Ernest Garfield Clark.

Charles and Amy remain in Fremantle, West Australia for the rest of their lives, with Charles working as an accountant he also becomes a Justice of the Peace. 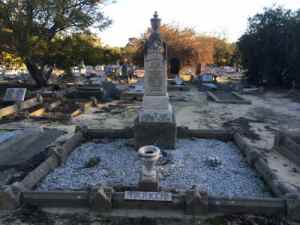 The final resting place of Charles, Amy, and their children John and Iris.