Frederick was born 17 March 1874 the same year as his father’s death, in Tokatoka, Kaipara area, (birth certificate number 1874/23694). He was the born the last child of Captain John James Stanaway and his fourth wife Sarah Ann Clark. 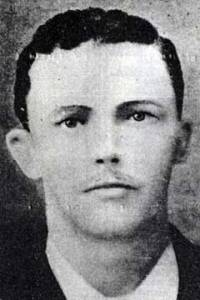 We have no records of Frederick’s childhood, he was without his natural father but would we assume have been raised with Sarah’s second husband Edward Sanders. We can only assume he would have had a similar education and childhood as his other siblings and for children at that time.

The first mention of Frederick is as a 15 year old in the New Zealand Herald 31 May 1889, in the Tokatoka regatta, where alongside his brother James John he competes. He enters the 20 feet open sailing boats class, unfortunately he fails to finish the race. Perhaps this may have reflected his choice in profession, he may not have been of his father’s elk.

He was apparently a very good houseman and found himself as a jockey. In 1896 we find Frederick again mentioned in the New Zealand Herald 7 January firstly in the Maiden Plate where he places first and again in the Sweepstake Hack Race where he places second.

Frederick dies on 12 January 1897 at Mangawhare, aged 22 and nine months old, he was suffering from pneumonia, while trying to lose weight. From Tides of Time Revised 2013 Edition:

Frederick was one of the early jockeys and his career was cut short by his early death at 23years by pneumonia caught whilst trying to reduce weight before a race.

Frederick did not marry nor have any children. He was listed in the Tokatoka Cemetery Records as being a labourer and living in Raupo (between Tokatoka and Ruawai).

He is buried in the Tokatoka Cemetery; his mother will later be buried next to him.

His death notice was published in the New Zealand Herald 8 February 1897; it was one of two Stanaway death notices. Sadly on December 27, 1896 only three weeks before Frederick passed away Sarah Stanaway, Frederick’s 9 month old niece also died it read;

STANAWAY – On December 27, 1896, at Maropiu, Northern Wairoa, Sarah only and dearly beloved child of Ellen and John James Stanaway, aged 9 months. We had a little treasure once, She was our joy and pride, We loved her perhaps too well, For soon she slept and died.

STANAWAY – On January 12, 1897, at Mangawhare, after a short and painful illness, Frederick, third son of Sarah Ann and the late J.J. Stanaway, of Tokatoka, aged 22 years and 10 months. Deeply regretted. He is gone, but not forgotten, never shall his memory fade. Fondest thoughts shall ever linger, around our darling Frederick’s grave. – Inserted by his sorrowing mother and sisters.

Frederick was missed by his mother and siblings in the New Zealand Herald in 1901 and again in 1904 in memoriam notices were inserted by his older sister Helena Moloughney (nee Stanaway on the anniversaries of his death). This may mean that he and Helena were particularly close.

STANAWAY – In loving memory of Frederick Stanaway, who died on January 12, 1897, at Mangawhare, in his 22nd year. “The Lord Gave, and the Lord hath taken away, Blessed be the Name of the Lord.” Peaceful be thy silent slumber, Peaceful in his grave so l; He no more will join our number, He no more our songs will know; Yet again we hope to meet him, When the day of life is fled, And in Heaven with joy to greet him, Where no farewell tears are shed. – Inserted by H.M

STANAWAY – In loving memory of Frederick Stanaway, who departed this life on January 12, 1897, at Mangawhare, Northern Wairoa, aged 22 years. The Midnight stars are beaming upon a silent grave. Where, sleeping without dreaming, is one who could not save. In dreams we see his loving face, and kiss his loving brow. And whisper as we loved him then, we love his memory now. – Inserted by his sorrowing sister, H Moloughney.