John Aloysius Stanaway was born 21 June 1881 in Helensville and was the ninth child of Henry and Rose Stanaway (Birth Certificate Number 1881/1988).

We have no records of his early life but we could expect that it was much the same as his siblings and that of other children at that time in the area.

On 11 March 1902  John, at the age of 22 years and 9 months, signed up with the Ninth Contingent for Service in South Africa – The Boer War. His Regimental number was 7849, Trooper, South Island Regiment – D Squadron.

From his war records we see that he joined up in Dunedin, he was in Dunedin with his older brother Henry, his occupation was listed as a carter and his brother was listed as next of kin.

From  family accounts apparently he marched with the troops with his hat pulled down so he wouldn’t be recognised and reported as being under age. There is some discrepancy as to his age in his War Records.

At the end of the Boer War the New Zealand Government was asked to send a contingent of soldiers to England for the coronation of Edward VII. Young, unmarried and tall John was selected to be part of this contingent.

Arriving in England he was billeted at Aldershot (still a large military base today). The coronation was delayed as Edward VII developed appendicitis. In the meantime he did guard duty at St. James Palace. – Vincent Paul Stanaway

John was discharged after 240 days service. He received the South Africa 1902 clasp.

The next record we have of John  is in 1909, where according to Archives NZ he is working as a “Locker” then by 1910 and until 1915 as a “Tide Waiter” in Wellington. These are what we would now call NZ Customs – he would board ships and watch the loading and unloading goods, inspecting what has or has not been declared, rewards were issued to these workers if goods were found that had not been declared. 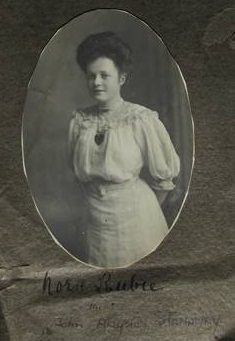 Nora was the youngest of 2 children of Philip Charles and Eleanor Rubie. Her father died in Madras, while Eleanor and the children lived in England at that time. After her father’s death her mother decided to move to New Zealand, Nora was about 15 years old when they arrived in New Zealand. Nora had been involved in two shipwrecks, the first was on the vessel Clan MacGregor on her way back to England, and then on her voyage to New Zealand the Ruapehu ran aground on Farewell Spit on New Years Eve 1900. Nora was very musical.

Vincent was given no middle name because his parents didn’t get him christened as they were in Auckland at the time of the Spanish flu was about and would not risk taking him out – Vincent Paul Stanaway.

John went to work for his brother-in-law, Wilfred Allen.

John and Nora started a grocery store next to the Star theatre in 1925. 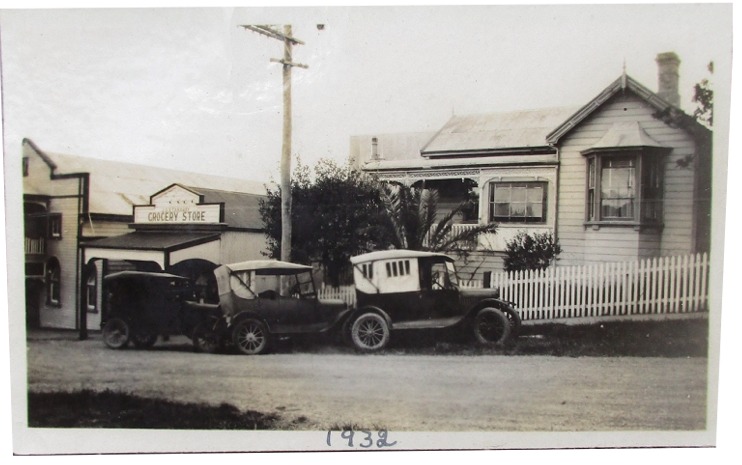 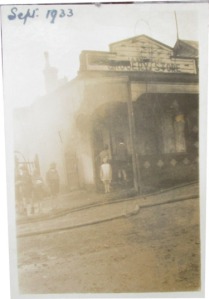 The store after the fire – Vince Stanaway Collection

The Star Theatre which had seen the beginning of the Secondary Department of the Helensville District High School was razed in a fire which also consumed Mr. Jack Stanaway’s nearby grocery store around 4 a.m. on 21st September 1933…… The Star Theatre, the property of the A.O.F. Lodge, erected by Henry Stanaway for $357 on a site donated by Daniel Stewart in 1884, was never rebuilt…… Mr. J. Stanaway reopened his grocery business in Megson’s original store across the road and nearer the Awaroa River.

Mr Stanaway had scarcely begun trade in his new store when Stewart Bros. sixty year old premises on the opposite side of Commercial Road were completely gutted  by flames.

They opened another store on the corner of Green Lane and Garfield Road in 1933, but were burnt out again in 1944. They then opened a small shop on the corner of the Regent Theatre – to keep the business until Vincent returned from WWII.

Another severance with Helensville’s past was caused by a fire in April, 1944, which completely removed all traces of the old store by Awaroa bridge, originally owned in the 1880’s by Joseph Megson and at the time of the fire, owned by Mr. Jack Stanaway, grocer. The hairdresser’s business which adjoined this store was also destroyed by the flames. Mr. Jack Stanaway, who had lost his previous grocery store by fire, was again a heavy loser, but undaunted, he set up a new grocery in the corner shop of the “Regent Theatre”. Later, Vincent Stanaway succeeded his father in this store and in 1949, this business was sold to R.J.Pickering.

As Chairman of the Helensville Town Board, the welcoming speeches at these functions were made by Mr. Jack Stanaway, the only man known to have left from Helensville to fight in the Boer War and the father of a young soldier, Vincent Stanaway. 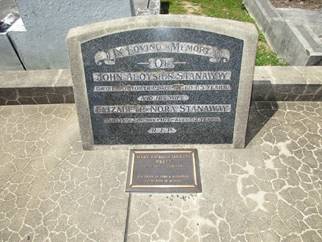 Nora played golf, tennis and croquet, was president of the Women’s Auxiliary during the war and was a Life Member of the Women’s Section of the RSA. She was also a member of the Helensville Musical and Dramatic Society and the Woman’s Institute and very active in St Joseph’s Church where she was organist at one time. 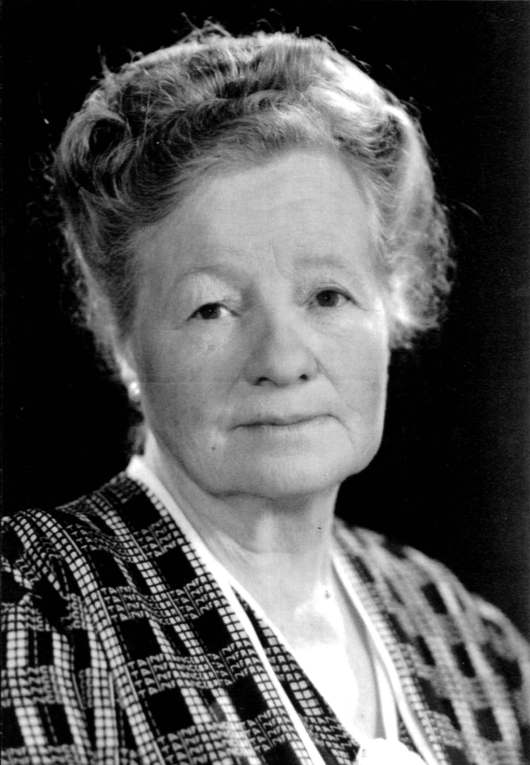