Not much is known of his childhood other than we could expect it to be much the same as other children at the time in Auckland.

The first record we have of John is in the Electoral Roll of 1905, where he is recorded as living on Nelson Street and operating as a merchant.

By 1908 John is moving into the Hotel business. In the New Zealand Herald 24 October 1908 he applies for the transfer of Licence for the Globe Hotel on Wakefield Street, Auckland, which is approved on 2 December 1908.

In the Dominion newspaper on 7 December 1910 had the following article;

“A BOLT FROM THE BLUE.” – DIFFICULTIES OF HOTELKEEPERS. ;(By Telegraph—Special Correspondent.) Auckland, December 6.

At the quarterly meeting today of the Auckland Licensing Committee, the police report concerning the City Hotel (licensee, “Walter Stimpson) and the Globe Hotel (licensee, John Ernest Parker) stated that the houses were frequented by women of a low class. Mr. J. A., Quinn appeared for Mr. Stimpson.

Sub-Inspector Hendry remarked that inspecting police officers had found women of low class in the hotels drinking. The effect of this could only lie to bring men of lower class about the houses, and to make the houses haunts for idle, disorderly people. He suggested that the licensees could get over the difficulty by refusing to sell to women any drink for consumption on the premises. 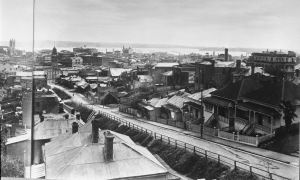 Mr. Quinn said that the complaint had come to his client as a bolt from the blue. He urged that Mr. Stimpson was a proper man to conduct a hotel, and that no licensee could possibly distinguish the reputable from the disreputable woman.

Mr. Parker appeared in person. He had had the same difficulty as that mentioned by Mr. Quinn, and he had decided to adopt the suggestion offered, by the sub-inspector.

The Bench were satisfied with the explanations offered.

John continues on as the Hotel Proprietor of the Globe Hotel until 1914. He transfers the Globe License to a Mr. Bernard Douglas. The New Zealand Herald on 4 August 1914 made notification of this.

By 1919 we have John living at 86 Clarence Street, Ponsonby and working as a contractor.

Then by 1928 still living at 86 Clarence Street in Ponsonby, but now working as a millwright – A millwright is a tradesperson who installs, maintains and repairs stationary industrial machinery and mechanical equipment by interpreting drawings, performing layouts and assembling parts until they are in perfect working.

In July 1932 John ventures again into the Hotel business, this time the Alexandra Hotel at the corner of Federal and Kingston Streets in Auckland. This was approved by the Quarterly Licencing Meeting and notified on 7 September 1932.

John remains the Hotel keeper until 1940, when he transfers to his son John Chetwyn Parker. The Auckland Star ran the notification on 26 September 1940.

By 1946 John has retied and spends his time between a property in Cornwallis Beach, Waitakere and 86 Clarence Street, Ponsonby, until his death.