We suspect that her childhood was much the same as other children at that time growing up in the Kaipara area.

The first records we have of Isobel is from the 1900, 1905 and 1911 Electrol Rolls where she is listed as living in Helensville – domestic duties. 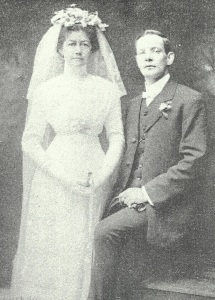 In 1919 Wilfred purchases Mr Graham’s Grocery and Drapery Business, and freehold property – he has left Messers Stewart Bros. store to start his own.

“A businessman, who, since 1906 had built a good reputation in Helensville, both as a grocer and as a courteous, public-spirited man, left Stewart Bros. store in 1919 and began in business on his own account at Helensville south. This man was Wilfred Allen and the grocery and general store he purchased, was that of Mr. Graham, on the north corner of Karaka Street and Commercial Road. This store had been built by J.A. Vercoe in 1903 for Mr. Hardy and had been owned by Mr. Masters before Mr. Graham’s time. When Mr Allen went into this shop, a verandah rimmed it on both frontages and a street light, one of the few in Helensville, stood on the corner and was maintained by the owner of the store. Mr. Allen’s staff consisted of his wife, her brother Jack Stanaway and her sister Eileen……. The ownership of this store included that of the old home of Charles Nelson on the same section, and by the late 1920’s Mr. Allen had made this house and grounds into one of the show places of Helensville with many trees, tennis courts and an aviary. Mr. Allen sold this grocery business in 1938 but conducted a store in Kumeu until 1961.”

Advert for the store – Kaipara and Waitamata Echo 18 March 1920.

Unfortunately this store and the home and tennis courts are now gone – it has been replaced by (at the time of this being written) a RD1 store!

The Electrol rolls from 1914 until 1928 have Isabel living on Eighth Avenue, Helensville.

Her husband Wilfred, goes on to remarry, this time to Norah Patricia Stanaway on 8 February 1936, in Helensville. (This is the daughter of Joseph Patrick and Ethel Flora Stanaway). Wilfred and Norah have five children – Bernal 1937, Creina 1940, Brian David 1943, Michael 1944, Noni 1955.

Wilfred passes away on 6 April 1978 aged 95 and is buried in the Helensville Cemetery Block E3 Lot 7.