While searching the internet for more information on the Stanaway family I was in the Archway Records site. I found a record which relates to Henry Stanaway. – it reads… 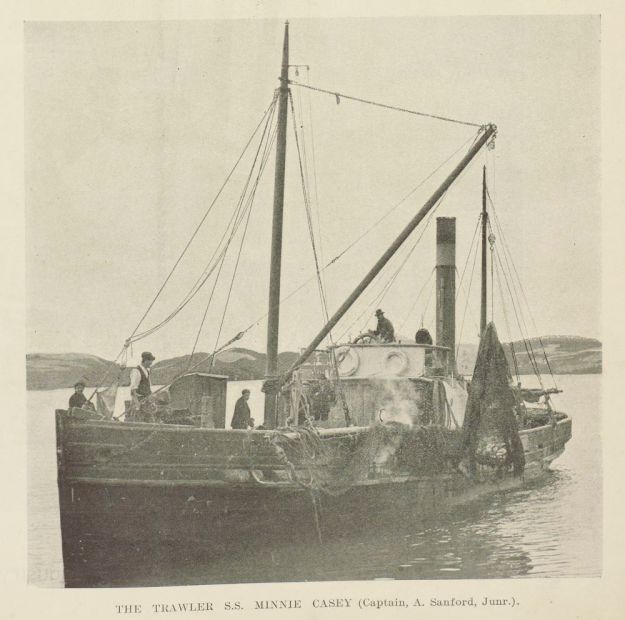 SS Minnie Casey later in life when owned by the Stanford’s.

Captain Henry Stanaway was master of this vessel, when operated as a ferry, the above report appears to be late in the life of the vessel as a ferry on the Kaipara.

Jean Marie Paitry was a Frenchman, a foreign legionnaire who deserted ship in New Zealand, and worked on ships in the Kaipara Harbour and the Hauraki Gulf.

A search of the vessel Minnie Casey revealed the following, from the “Back Roads Blogger” site we read …..

Constructed in 1875 by Sims and Brown, North Shore for Irish entrepreneur, Jeremiah Casey and named after one of Casey’s daughters she measured 101.7ft x 15.8ft x 7.55ft and fitted with two 25hp steam engines. Casey used her on the Auckland to Mahurangi run until 1878 when the vessel was transferred over to the Auckland to Kaipara run.

In the same year, the Kaipara Steam Navigation Company begun by William Colbeck started up in opposition. Colbeck offered a substantial sum to buy the vessels Casey was using on the run and the offer was accepted.

By 1880 Colbeck’s company was running at a loss and measures taken to sell off two vessels ss Kina and ss Tongariro both costing the KSNC more than what was coming in.

In April 1883 the Minnie Casey collided with the brig Syren at Te Kopuru wharf and both vessels became entangled. Eventually, they were cut free and a subsequent enquiry resulted in the Syren being apportioned the blame for the incident.

By the end of August 1883, the Kaipara Steamship Navigation Company board announced it was in trouble – debts were being called up and desperate measures were required. A decision was made to sell the company assets including vessels Durham, Minnie Casey, and Kina as well as the City of Cork and the Lily.

In December of the same year, all vessels and assets were sold to the Northern River Steam Navigation Company. During 1885 all three vessels on the Kaipara run were given full overhauls and returned to service.

In December 1885 the Minnie Casey collided with the Tangihua:

At two o’clock this morning, when the steamer Minnie Casey was on her passage from Dargaville, she collided with the; steamer Tangihua off Beacon Point, Wairoa River. On the steamers meeting the Tangihua suddenly starboarded her helm, running; completely under the bows of the Minnie Casey, which struck her on the starboard side. All on board the Tangihua jumped on the Minnie Casey, and the former steamed about without control for eight minutes and sank in deep water. It was a pitch dark night but all the lights were burning. The cause of the collision was the Tangihua’s helmsmen starboarding instead of porting. The Tangihua was owned by Captain Seymour and was uninsured. The Minnie Casey was slightly damaged in the port bow.
Press, 21 December 1885, p3.

In January 1888, the vessel narrowly avoided being burned to the waterline when the heat from the boiler caused a pantry to combust. The fire was discovered before it could take hold on the vessel and put out.

In 1899 the Minnie Casey was sold to Sandford for use as one of the first fishing trawlers in the Hauraki Gulf and remained in use until 1908 when she was finally laid up at Rakino Island and put up for sale. She was sold and broken up in 1909.

We do not have any employment information related to Captain Henry Stanaway as yet but we could suppose that he, more than likely worked, in some form or another, for all the owners of the ferry companies operating in the Kaipara, namely –  Casey, Colbeck and the Northern River Steam Navigation Company.