I have come across a centaury celebration booklet published by Wesley College. It lists past students of the college. Back when the college was still located in Three Kings, Auckland in the year 1896, we have a new entrant by the name of TANIWE, Wirimu (STANAWAY, William). 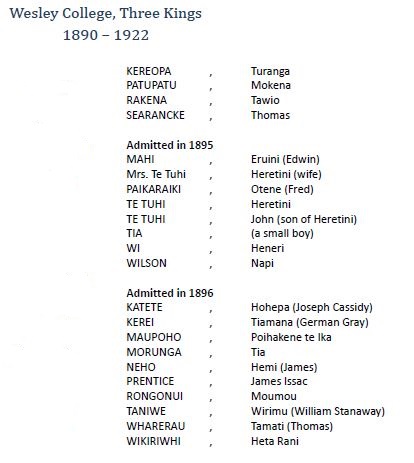 With that name he must be one of JJ’s descendants, but which one?

I have narrowed it down to one of two contenders;

From their DOB’s William Henry would have been about 21 years old and therefore perhaps on the too old side of things. He may have been sent to the College in order to change his ways – there is a gap in our records at this time (1895-1898).

James William would have been 16 years old and perhaps more likely to have been sent to the boarding school for a period. We have no records of his early years. His father was known to use Taniwe in lieu of Stanaway.

I would like to hear from anyone who can confirm the TANIWE, Wirimu (STANAWAY, William), mentioned in the Wesley College records.

Thanks to some detectives we have uncovered some more information.

We have a report from the Auckland Star, dated 10 December 1897, which published the results for that year, in which it has William in the Lower division (we assume the junior part of the school) recording a score that year of 365 points, having studied catechism, arithmetic, composition, transcription, geography and reading.

The following year the New Zealand Herald reports on 19 December 1898, William again at the school, this time in the Second Class (We assume the intermediate part of the school) recording that year he studied in 8 subjects and scored 65 points.

The photograph below is of the Aratapu Second Juniors – Winners of the 1905 Caps, under the Northern Wairoa Rugby Union. In the back row is Alexander Stanaway (back left), then standing to the left, as we view the photograph, is a young boy. He has managed to get himself into the photograph.

My comments on Alexander Stanaway’s page that he could be one of his younger brothers.

I was having a look at Montrose Stanaway – the only picture I have of him is when he was in his mid twenties. Never the less have a look at the comparison below. 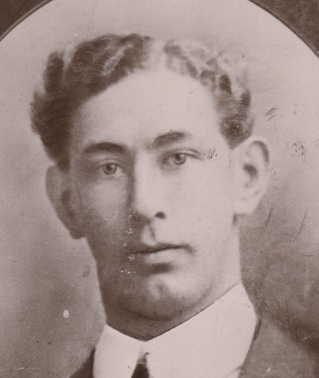 I don’t think that they look too dis-similar. The photograph of the boy is dated 1905, this would make Monty about 12- 13 years old (Alexander would be 18-19 years old). I think they have similar ears and jaw lines and round forehead.

The boy could be Charles or George Stanaway?

Or no relation what so ever. Let me know your comments please.